Oliver Parr (Coventry, U.K. 1973) is a British cellist and composer. 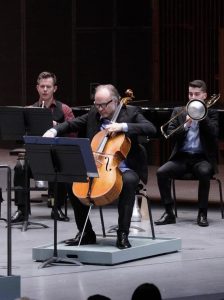 Oliver studied cello in Manchester with Eduardo Vassallo, in Paris with Radu Aldulescu and at the Musikhochschule Detmold with Karine Georgian.

Since 2000 Oliver has been the solocellist of the Remix Ensemble Casa da Musica with whom he has performed at most of Europe’s major festivals and concert venues, including Wien Modern, Milano Settembre, Berlin Marz Muziek, Strasbourg Musica and Donaueschingen. He has worked and collaborated with many leading artistic figures including Heinz Holliger, Sir Harrison Birtwhistle, Jonathan Harvey, Magnus Lindberg, Peter Eotvos and Luca Francesconi.

Oliver is also currently solo cellist of the Sinfonia Rotterdam chamber orchestra, and has appeared as solo cellist with ASKO Schoenberg, Amsterdam Sinfonietta,  and Insomnio Ensemble.

As a composer Oliver has written for orchestra, ensemble, quartet, and solo instruments, and is the founder and artistic leader of the James Whale Orchestra, for whom he has written soundtracks to be performed live with films including James Whale’s ‘Frankenstein’ and ‘The Invisible Man’ , F.W. Murnau’s ‘City Girl’ and ‘Nosferatu’, and is currently developing a new score for Hitchcock’s ‘Blackmail’.

Beyond music, Oliver lives in Utrecht in the Netherlands, has 4 children, does quite a lot of jogging and has a BSc in Psychology.